Top 3 Windshields For The Polaris RZR

Because people ride for different reasons, on different terrain types, and in different weather conditions, there is no single best windshield for the Polaris RZR. Many RZR owners run half windshields on their RZRs in the summer, then throw on full RZR windshields when things get chilly in the winter. There are many combinations of RZR windshields that can work, but the most popular combo for all-year riding we’ve found are the RyFab full glass vented windshields for cooler weather, and the Rogue Powersports windscreen for warmer weather.

Vented RZR windshields are common as well, however many riders have complained that the lower flip-up vents on some windshield brands don’t provide the same flow as a flip-up windshield does on those hot summer days. Vents do help, however, to prevent the windshield from fogging up during those colder days if you run an enclosure on your rig. On a similar vein, flip-down RZR windshields are good at regulating heat during any season. The only reason we’ve heard of for why people don’t like their flip-down windshield is that they can cause the plastic cowling on the hood to wear due to movement in the down position. Plus, flip-down windshields deflect absolutely zero wind, dust, or rain when flipped down, unlike a true half windshield that has an upper lip on the top to deflect unwanted debris. 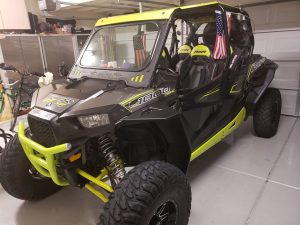 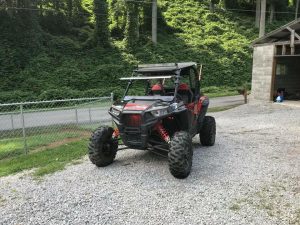 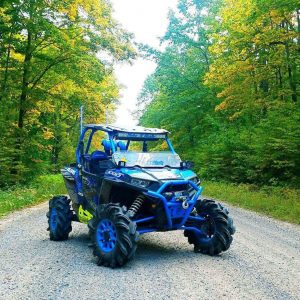 Half windshields get a lot of flack. Sure they’re not the best when it gets rainy or cold, but they do provide a buffer from the wind and stop dust from infiltrating the cabin. So if you’re riding in the heat and want that perfect amount of protection, EMP’s half windshield for the RZR, RZR 4, and RZR Turbo won’t let you down. This UTV wind deflector is hard coated to prevent scratches, and tinted to lessen glare from the sun. It’s fastening clamps are super easy to use, making it perfect for quick installs and rapid removals.

So there you have it, the top three Polaris RZR windshields, by riders, for riders. Let us know your thoughts, and like always, if you have any questions about choosing the right windshield for your Polaris RZR, don’t hesitate to drop us a line for any and all Polaris RZR related questions, comments, or concerns.