​The Best Aftermarket Exhaust Systems For The Polaris RZR 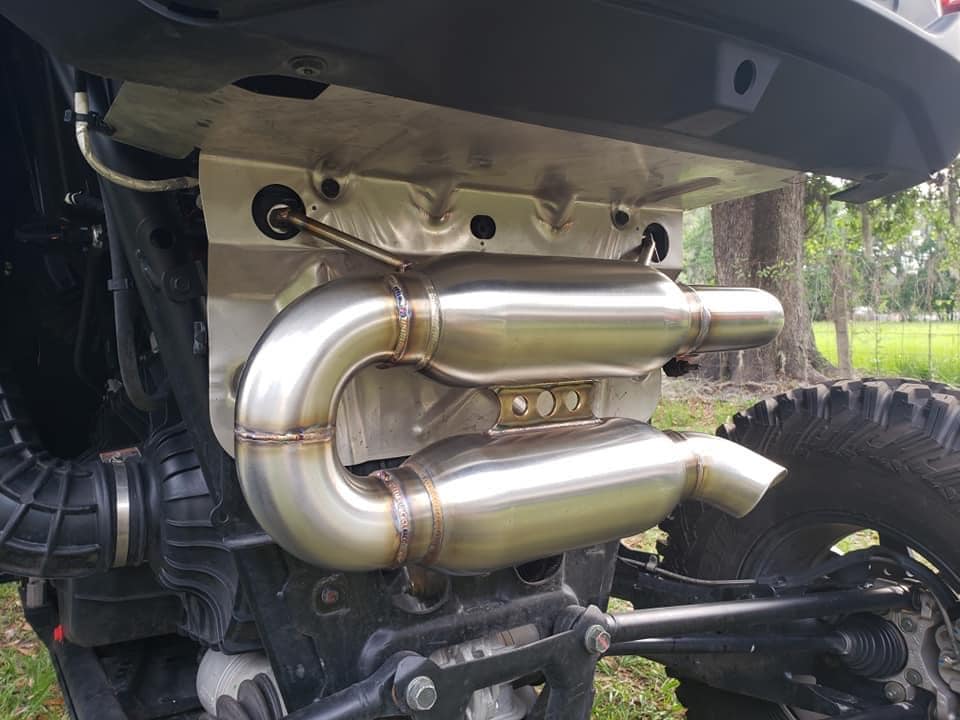 It’s a difficult job determining which aftermarket Polaris RZR exhausts, Polaris RZR Turbo exhausts, and Polaris RZR 4 exhausts are the best. And when it boils down to it, there really is no single “best” exhaust. It’s all simply a matter of opinion, with some riders choosing Polaris RZR exhausts based on the sound they produce, and other riders choosing Polaris RZR exhausts based on the performance gains they provide. In states like Maine, running an aftermarket side-by-side exhaust is illegal, and many trails, towns, and ORV parks have also banned the use of aftermarket UTV exhausts due to the loud noises they emit. Nevertheless, it’s not uncommon to see riders with straight pipes that make their Razors sound like a big-block Chevy. And if you don’t like your neighbors, you might be of the opinion that the louder your exhaust, the better. But regardless of whether you want to play a little game called “The Cops Are Coming In 20 Minutes” with your neighbor, or if you want a quiet Polaris RZR exhaust to go faster without being heard, here are our thoughts on the best aftermarket exhausts and exhaust systems for the Polaris RZR!

If a loud exhaust is music to your ears, there are several options that’ll give you the sound output you desire. Of all the many great Polaris RZR exhausts out there, few can match the resonance of a Gibson Dual Exhaust. Some complain that Gibson exhausts are too loud, and we’ll admit that on trails, they can become a tad obnoxious. But on the dunes and wide open flatlands, few Polaris RZR exhausts sound meaner than a Gibson.

That being said, the Polaris RZR exhausts by Aftermarket Assassins are also aggressive sounding, and if you want to mellow things out, you have the option to use a muffler and a quiet core stealth cap with an Aftermarket Assassins exhaust. Firms like Empire also offer Polaris RZR exhausts with quiet cores, but for unmatched flexibility, exhausts like the ones by EVO or RPM with electric cutouts are the way to go. With a Polaris RZR cutout exhaust, you can make your machine loud when you want to, then quiet things down when you’re stalking game, riding in noise-restricted areas, or sneaking back home after a late-night booze cruise.

Cutout exhausts are good for their versatility, but some riders opt for side-dump exhausts like the ones by GGB Exhaust Technologies. An open dump right behind the passenger door may be fine for the driver, but they can be quite noisy for passengers. So if you want an exhaust that is loud but also deep, you can simply put a vibrant resonator on the factory head pipe. But if you’d rather get some performance gains out of your tuned Polaris RZR exhaust, the slip-on exhausts and full-blown aftermarket Polaris RZR exhaust systems by firms like Trinity Racing, HMF, and Big Gun rarely disappoint! 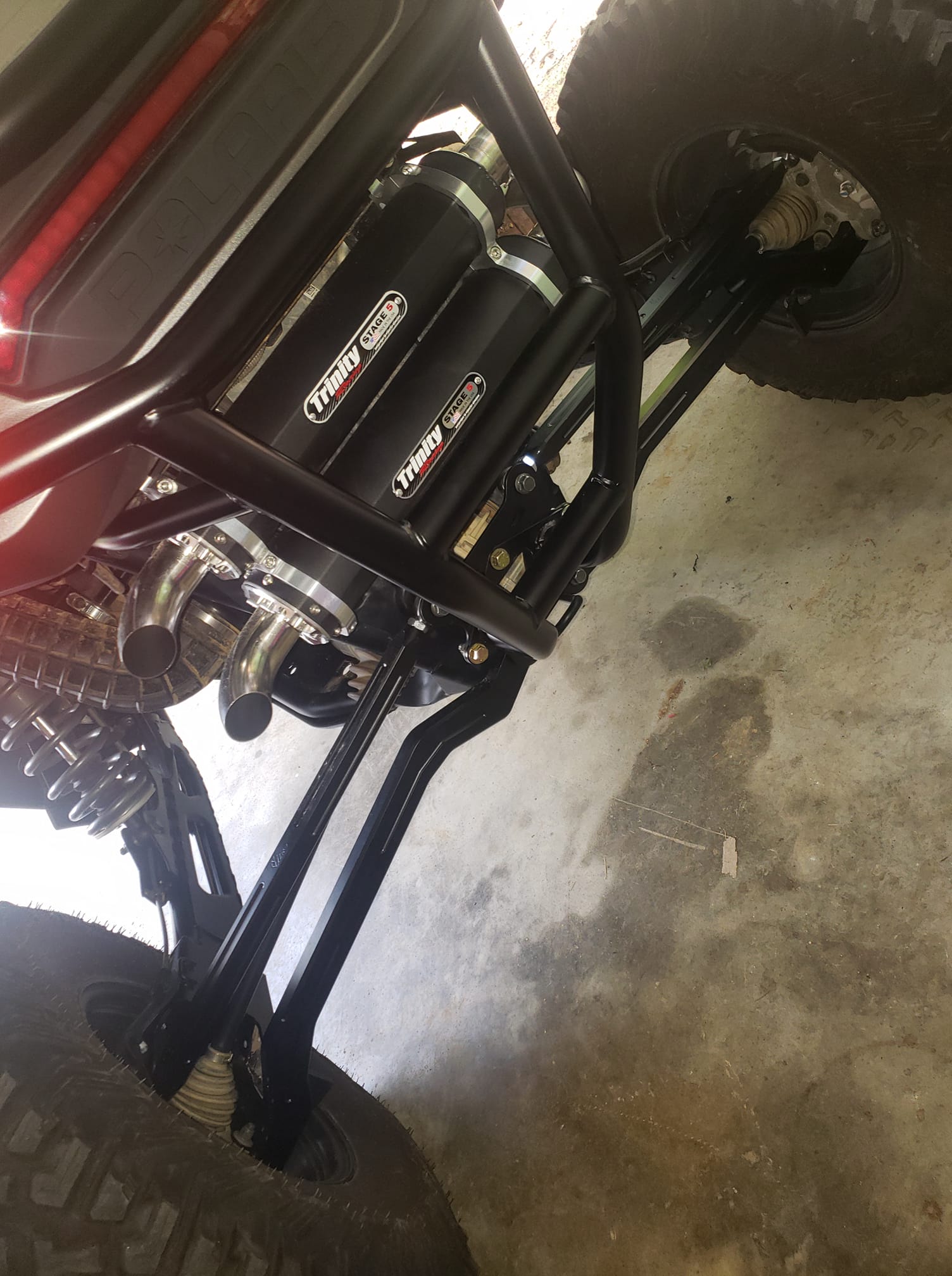 Unlike Gibson exhausts -- which are loud and raspy -- units like MBRP exhausts aren’t overly loud, yet still produce a noticeably deeper tone. MBRP exhausts also come pre-assembled, but installing a non-assembled Polaris RZR exhaust like those by Trinity isn’t a Herculean task by any stretch of the imagination.

Trinity exhausts for the Polaris RZR produce a nice deep grunt, nothing crazy, but definitely noticeable. If you want an exhaust that doesn’t drone super bad from the inside, a Trinity Stage 5 exhaust is for you. They can be coupled with a programmer / tuner so that you can adjust the parameters, and you have the option of getting either a full Trinity exhaust or a slip-on Trinity exhaust. 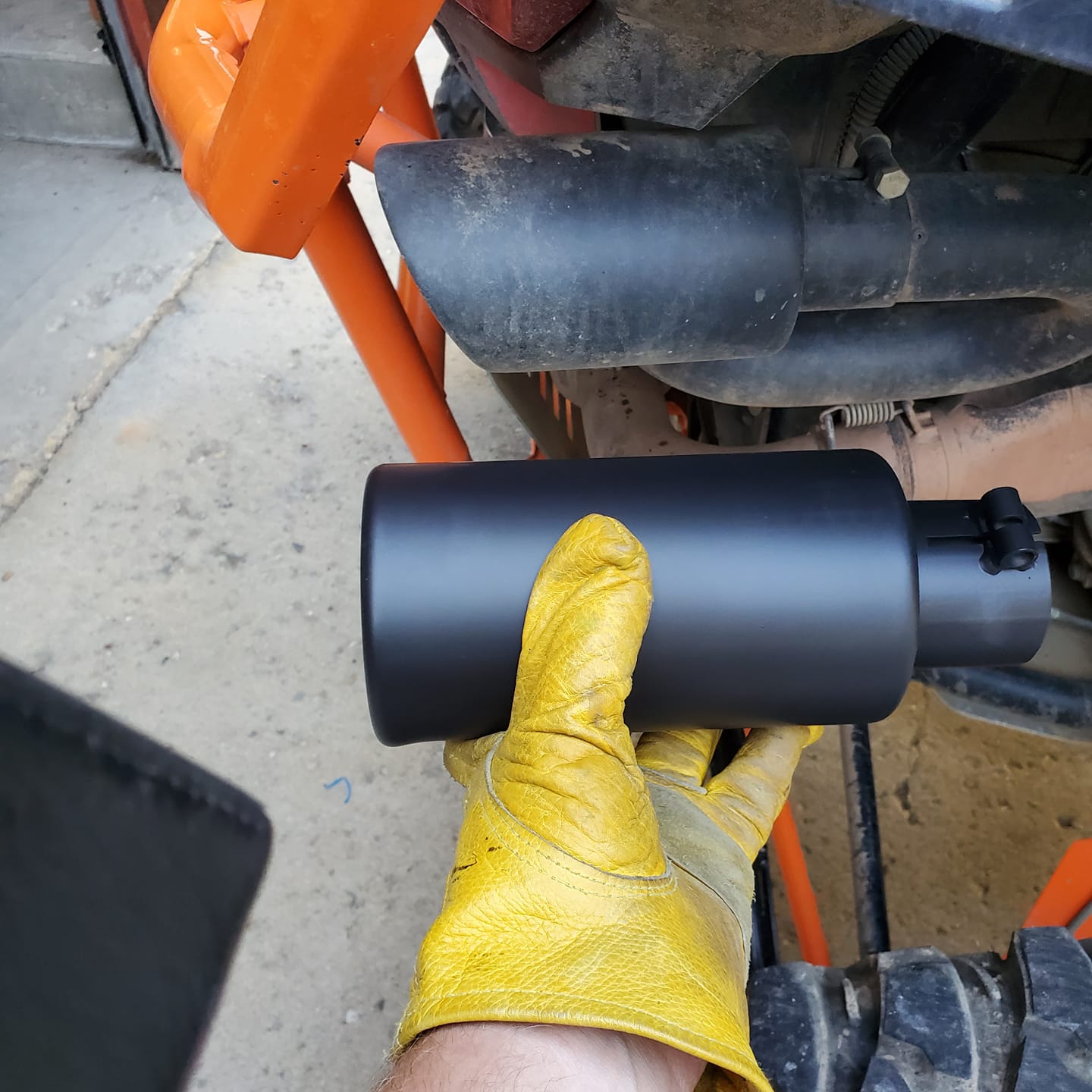 As we mentioned earlier, many exhausts and Polaris RZR mufflers can be equipped with quiet cores to dampen the outcoming noise. A Trinity Stage 5 exhaust, for example, is around 6-8 decibels louder than the stock exhaust. But with a quiet core installed, it’s about as loud as the factory Polaris RZR exhaust. If your goal is to be loud, an HMF Swamp Series exhaust, a Bikeman Performance exhaust, or a BMP exhaust will get you there. And if cost is an issue, you could also do a cat delete on your stock Polaris RZR exhaust and drill / perforate the baffle.

Exhaust silencers are another option, but they can restrict airflow and cause performance reductions. So to achieve a quiet ride without sacrificing HP, something like the Polaris RZR S 900 Slip-On Exhaust by Empire will work wonders. SLP exhaust tips are also known for being quiet. They are about as loud as the stock exhaust, but the tone they emit is much lower. 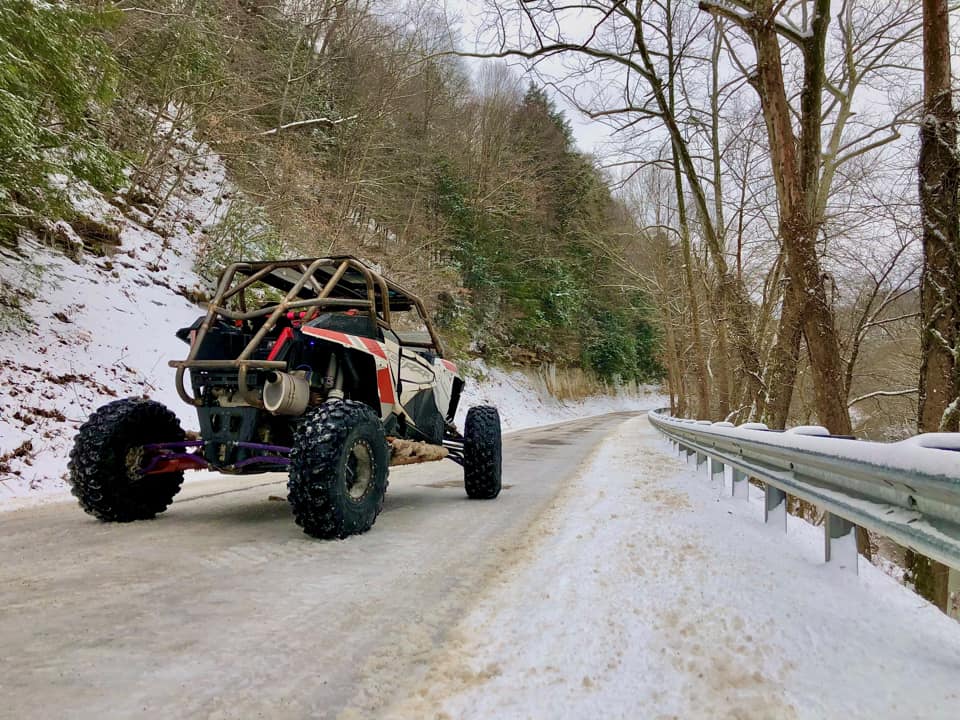 As the saying goes, less sound equals more ground. A loudness level of an aftermarket Polaris RZR exhaust doesn’t always equate with horsepower boosts, and a quiet exhaust doesn’t always reduce horsepower. Removing your Polaris RZR exhaust is a surefire way to increase the decibels, but this will typically result in error codes being thrown. For best results, you should always pair your aftermarket Polaris RZR exhaust with an ECU tuner. And if you don’t want to replace your entire exhaust system, you can definitely mix and match parts. An EVO Shocker with the stock muffler, for example, is a good combo, and you can add Works or Silber mufflers to your RZR Turbo exhaust.

O2 Sensors are also important, and if you chop your exhaust pipe, you might inadvertently cut the oxygen sensor along with it. Similarly, exhaust heat shielding is something to keep in mind as well, as the screws on some exhaust heat shields are known to rattle off. But if you’ve conducted adequate research and have a Polaris RZR exhaust in your crosshairs, pull the trigger and pick up the perfect exhaust system for your needs at Everything Polaris RZR!