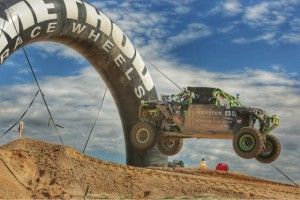 The UTV classes combined had 54 entries in the Laughlin Desert Classic (most of them were Polaris RZRs). The two-day race took place on a racecourse that featured several miles of new desert terrain that had never before been utilized in a Laughlin racing event. The course was a punishing track that pushed the drivers in a true test of stamina and skill.

Marc Burnett ran his No. 905 Monster Energy RZR XP Turbo EPS while Branden Sims ran his No. 913 Lone Star Racing RZR XP Turbo EPS. On day-one, Burnett started the race in the fourth row. Within 3 miles, he was passing other racers until he caught up to the front-runner, Sims. Sims appeared to be the race winner, but after a time correction, Burnett came out with the win.

On day two, Burnett started in the first row where he and fellow Polaris Factory Racer Mitch Guthrie Jr. dueled for the front position. Guthrie Jr., driving his No. 1951 RZR XP Turbo EPS ran into a bit of trouble and had to drop out of the race. Burnett wound up with first place for the Pro Turbo as well as the overall win for the two-day race. Jacob Carver, also racing a Polaris RZR took second overall, followed by Sims with third overall. 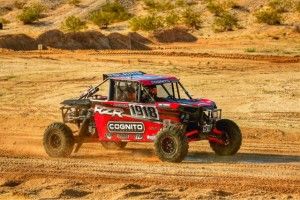 Justin Lambert, racing his No. 1918 Cognito Motorsports RZR XP 4 1000 EPS, started on day one in the front row and finished the day with an incredible 4-minute lead. scooped up his fourth win in a row in the UTV Production Class race at the Laughlin Desert Classic.

On the second day, Lambert played it safe while maintaining his lead. At the end of the two-day Laughlin Desert Classic race, he finished with a 1-minute lead and scooped up his fourth win in a row and the overall win for the Pro Production Class.

The next BITD Race is the General Tire “Vegas to Reno” The Long Way presented by FOX, Aug. 17-20.